Hiroo Onoda was a dedicated Japanese soldier enlisted in WWII. He was sent to the Philippines in 1944 with orders to hold off enemy attacks on the island. His commanding officer ordered him to never surrender or take his own life. He took those words to heart and when the end of the war was announced in 1945, he and his comrades thought it was a trick. Over the next 30 years, he lived in the mountains with a few fellow soldiers and carried out guerrilla attacks with deadly effect. In 1974, his original commanding officer was sent to officially relieve him of duty and confirm that the war was over. He finally agreed to lay down his rifle and sword and return home.

Hiroo Onoda was born into a family with Samurai roots. When he was 18, he enlisted in the Imperial Japanese Army Infantry to help with Japan’s war effort. Two years later (1944), he was sent to an island in the Philippines called Lubang, where he joined forces with a group of Japanese soldiers in hiding. After the island was reclaimed by the Philippine Commonwealth, Onoda and three remaining soldiers fled to the hills. They were isolated from society and took part in guerrilla warfare which claimed the lives of two of their members. 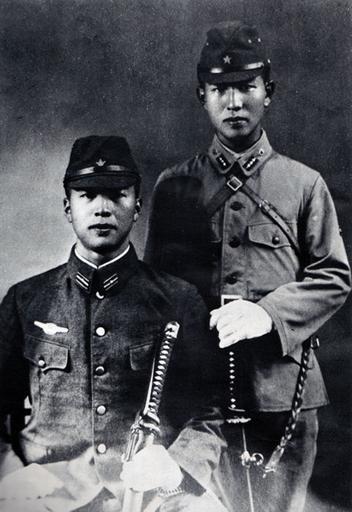 Young Onoda on the right with a fellow soldier

The group of soldiers first saw evidence that Japan had lost the war in 1945 in the form of a leaflet – but they believed it to be an allied trick. In 1949, one of their numbers surrendered to the Philippine police. Pictures and letters from their family were dropped from an aircraft to try to convince them to surrender. Thinking it to be another trick, they stayed hidden. In 1972, 27 years after the war was won, Onoda found himself alone when his last comrade was shot and killed by local police.

Two years later in 1974, a Japanese tourist named Suzuki managed to find Onoda in hiding. Later referred to as ‘the hippie boy’ by Onoda, he was unable to convince the lone soldier to come out of hiding. Suzuki informed the Japanese government and they sent Onoda’s commanding officer (who was now a bookseller) to officially relieve him of duty. Onoda turned in his sword, rifle and other weapons and formally surrendered. All of his 30-year-old equipment was still in perfect condition. One other soldier stationed in Indonesia held his position for longer than Onoda, but it was only by a few months.

Returning home a hero, Onoda struggled to reconnect with the modern way of Japanese life. In 1976 he moved to Brazil to raise cattle with his brother. Later that year he married and released his autobiography. He later returned to Japan to set up a charitable education camp after hearing about a teen stabbing. Revisiting the island of Lubang in 1996, he donated $10000 to a local school. In 2014, at the ripe old age of 90, Hiroo Onoda died from heart failure (caused by Pneumonia), leaving behind the legacy of the Samurai he was descended from.

Show Me the Proof